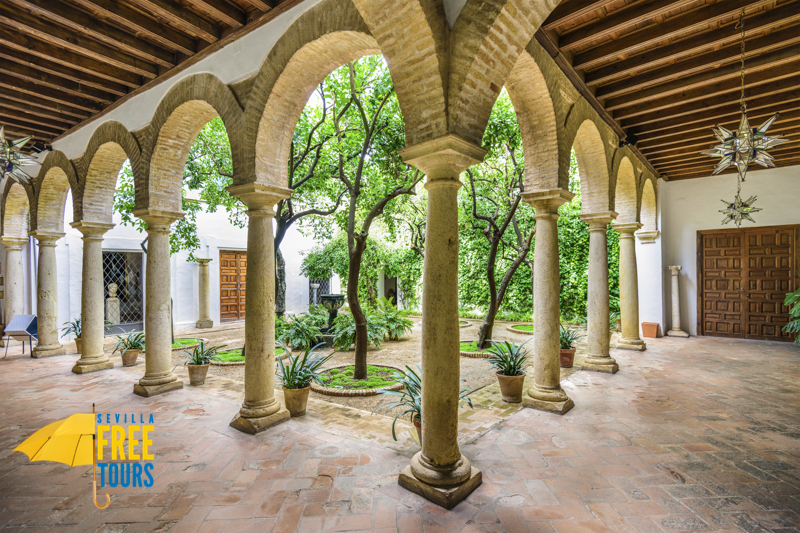 Founded in 1289 by King Ferdinand III of Castile, and built next to an old palace belonging to his son, the Infante Fadrique de Castilla. The convent complex was built between the 16th and 17th centuries. To do this, the palace was literally embedded, a Mudejar construction built after the Christian conquest of the city, and of which only the so-called Torre de Don Fadrique remains, of Romanesque and Gothic invoice, which made of ashlar masonry is a unique example in the city.

The Seville City Council opens Santa Clara to the public from today permanently and free of charge. With this opening, it will be possible to access this Royal Monastery that for more than eight centuries has been closed and that currently houses the headquarters of the Institute of Culture and Arts of Seville and the Bienal de Flamenco and the Festival of Ancient Music of Seville, among other numerous cultural proposals. Thus, from now on, it will be possible to enjoy, in general, areas such as the Renaissance Cloister, the Refectory and the surroundings of the Torre de Don Fadrique, one of the spaces most requested by visitors and which has already been used this summer as a stage space for different flamenco and theater shows.

During the visit to the old convent, its heritage will be exposed in a natural and permanent way, made up of marble columns from the cloister, tiles in the lower part, the wooden coffered ceiling and numerous heritage elements. In this way, Santa Clara joins the city’s tourist circuit as a space of high heritage value.

The Santa Clara Space was the seat of the Poor Clare nuns. In 1998, after the deterioration of the premises and eight centuries of continued monastic life, the last Poor Clare sisters left the monastery. An agreement signed in 2001 between the Archdiocese and the City Council made its rebirth possible, no longer as a convent, but as a unique space that generates and contains culture and heritage. Throughout these years a series of restoration works have been carried out, conditioning and rehabilitating the different rooms.

Among the areas that can be visited in the Espacio Santa Clara are the square Renaissance Cloister, the Refectory, decorated with tile sockets with a seat bench made of the same material, and the surroundings of the Torre de Don Fadrique, raised in the manner of the towers Italian medieval buildings and that the Infante Don Fadrique used as a leisure place among the gardens.

Schedule, prices and all the info you need to visit convent of Santa Clara in Seville