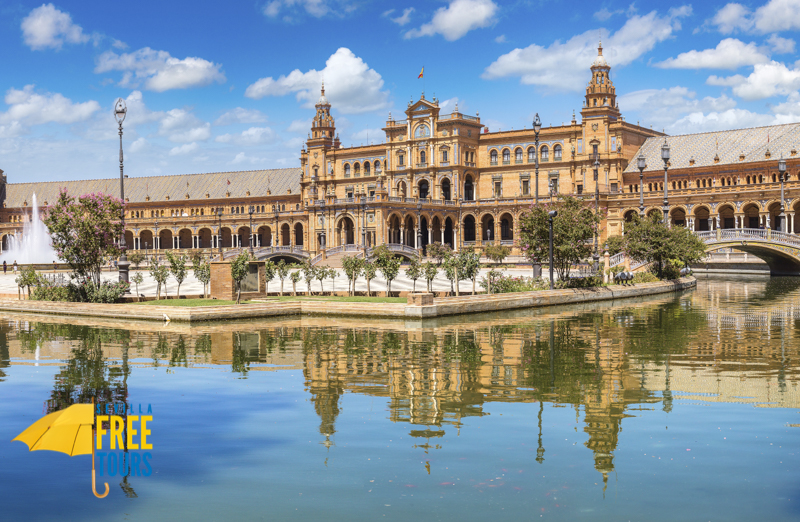 María Luisa Park is the most famous in the city. It was inaugurated in 1914 and was part of the private gardens of the Palacio de San Telmo, later designed by the French landscaper Jean Claude Nicolas Forestier in 1914.

The park is bounded by the avenues of María Luisa, Portugal, la Borbolla and las Delicias. It consists of a central axis where the ponds of the Lotos and the Ducks, the Fountain of the Lions and Mount Gurugú are located.

To the north the Plaza de España, which connects with the roundabout of El Cid and to the west by Av. Rodríguez de Caso with the Paseo de las Delicias and the Guadalquivir river.

To the south is the Plaza de América, between the Paseo de las Delicias and the Avenida de la Borbolla which is connected by the avenues of Don Pelayo and Isabel la Católica with the Plaza de España.

Glorieta de los Hermanos Álvarez Quintero, great authors of comedies. With a brick front where a ship with two sails is represented, It is complemented by a fountain and pond surrounded by benches, where we can see the images of the writers and the titles of their main works.

Glorieta de Mas y Prats, a Catalan genre writer who was part of Sevillian literary life in the 19th century.
Inside the park we will highlight:

Estanque de los Lotos, with the Glorieta de La Infanta María Luisa, daughter of Queen Elizabeth II, who donated these gardens that bear her name to the city.The gazebo dedicated to the songwriter Juanita Reina, next to the fountain an ancient kiosk from the 1929 Exhibition.

Garden of the Lions, with fountain and pergolas.

Mount Gurugú. Artificial mount adorned with gazebo and waterfall, named after the battle on a mountain of the same name near Melilla during the 1921 African War.

The Plaza de España, the greatest work of Aníbal González, one of the most spectacular buildings of regionalist architecture. It was built as the main building of the Exhibition with a navigable canal and all the provinces of Spain are represented on its banks, as well as the busts of illustrious Spaniards on its walls.

Plaza de América, commonly called plaza de las palomas. Beautifully landscaped with pond fountains and the Cervantes gazebos, with a tree at its center. The benches are decorated with scenes of Don Quixote in the area of ​​the roundabout of the writer Rodríguez Marín, poet and writer from Cervantes, decorated with a fountain and tiles where we can see the poet, both close to the Royal Pavilion.

The gazebos of the Mural Table, with the plan of the park and the Sundial.

In the Plaza de América the old Pavilion of the Arts, formerly called Renaissance, of Plateresque style stands out. Its main façade stands out with a portico decorated with a beautiful pediment and a cresting. In its surroundings it is decorated with sculptures representing the fine arts, in the Renaissance style, today the Provincial Archaeological Museum.

If you want to discover Seville from the heart book a free walking tour with us just in here.