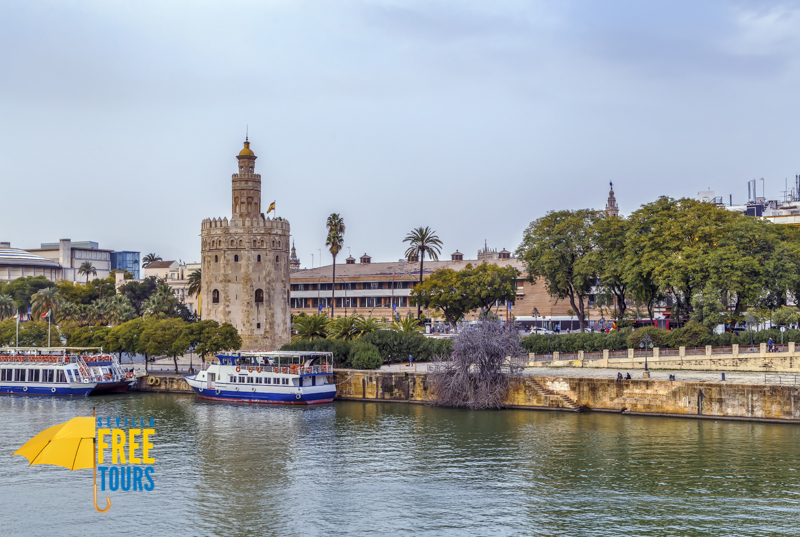 If you decide soon to visit Seville and discover part of our history and our monuments it is very possible that the Torre del Oro is in the Top 10 of Monuments in Seville.

Here we leave you a small guide so that you know when it was built, what functions it had and
especially since it is called Torre del Oro.

The Torre del Oro is an albarrana tower located on the left bank of the Guadalquivir River, in the city
from Seville, next to the Real Maestranza bullring. Its height is 36 meters and mainly
it had the function of control and supervision of river traffic.

It closed the path to Arenal through a section of wall that linked it with the Torre de la
Silver, which was part of the walls of Seville that defended the Alcazar.

It is a tower formed by three bodies, the first body, dodecagonal, was built between
1220 and 1221 by order of the Almohad Governor of Seville, Abù l-Ulà.

The second body, also dodecagonal, was ordered to be built by Pedro I the cruel in
the fourteenth century.

The upper body, cylindrical and domed, was built in
1760 by the military engineer Sebastián Van der Borcht. It was declared a monument
historical-artistic in 1931.

There are several legends that explain us, because it is called the Torre del Oro.

The first says that gold from the Americas was kept there, given its proximity to the port and its
defensive position.

It does not turn out to be very logical, the truth is that the gold that came from the Spanish colonies in
America and arrived at the same gold tower since it was located next to the area
port of the city, this was stored in the Casa de la Contratación, which today is
the Archivo de Indias, since it was later taken to the mint, which today
occupies the spaces of the foundry theater in Arenal.

Another of the most widespread legends says that the tower was covered with tiles that
they made it shine in daylight. Again, and despite the sumptuousness of some
Arab constructions, the tower was only a defensive tower without major importance
architectural or religious in order to be so ostentatious. But, they have been
surveys that have concluded that there were no tiles covering its surface.
The name of the Golden Tower, is due to its construction in lime and straw mortar
Pressed, this material in contrast to sunlight gives it a spectacular shine.

It is true and that very few people count, is that the gold tower was united
to another tower located in the Triana neighborhood, a little beyond where we find the
Plaza de Cuba today, there was a large iron chain that crossed from one
shore to another of the river and that disabled access to ships arriving at the port.
These had to pay a tribute that apparently consisted of a gold coin for
each ship or merchant that accesses the port area of ​​Isbilya.

These chains will finally disappear during the reconquest of Seville in 1248 a
hands of the Cantabrian and Asturian sailors, eager to get hold of that place
strategic that would facilitate Fernando III and his troops to take the capital of Seville.

Sevilla City Free Tour starts everyday at 10.00h at Plaza Nueva infront of the cityhall, look for the yellow umbrella.